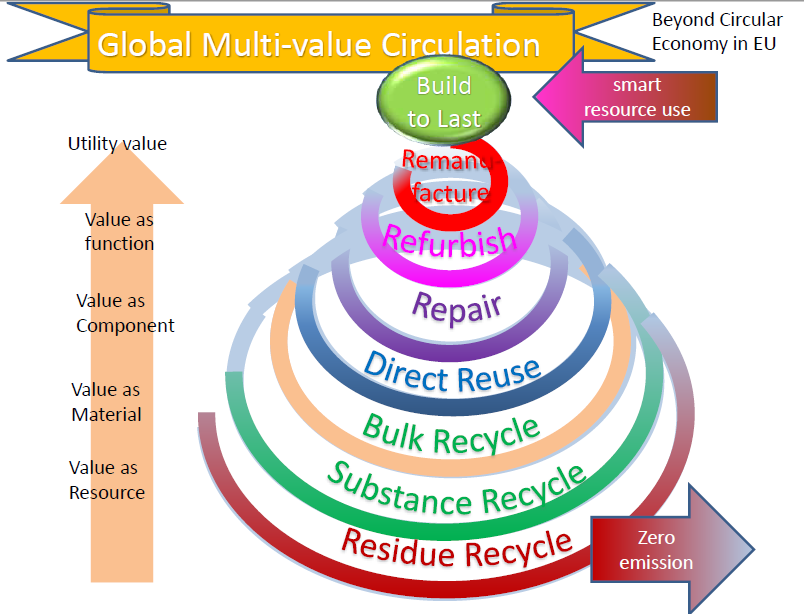 “Global Multi-Value Circulation ” is the name of forum on Circular Economy in Japan. This forum is launched at June 2018 to discuss and exchange the information on the movement towards the circular economy. Enterprises of production, providing, circulation which are major in Japan the forum of Global Multi-Value Circulation. Predominant universities and national research institutes also join it. The concept of Global Multi-value circulation is introduced at first part of this paper. Activity of the forum is also introduced. As the results of the discussion of the forum, remarkable points in the concept of circular economy are reviewed. The importance of resource efficiency through the boundary between the eco-sphere and the techno-sphere is insisted. 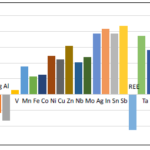 Fig. 1 shows the estimation of demand of resources till 2100 comparing with the amount of each existing reserve. This is obtained by the assumption in which every country attains the GDP more than 10,000$/capta, and the consumption of metals of the country becomes same level of the current country with over 10,000$/capta, and linier glowth of demand from now to the year 2100. The resources which can afford to is only four kind, Li, Mg, Al and rare earth elements. Demand of iron is two times greater than the amount of existing reserve, and demand of lead is nearly thirty times. 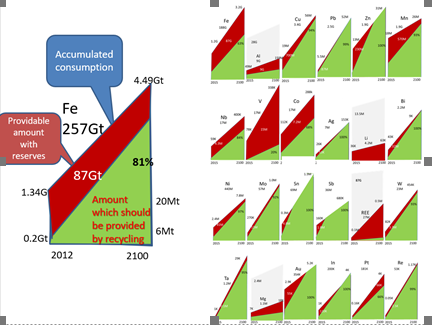 Fig.2 shows how much amount of materials should be circulated. Area of each prostrate trapezoid means total demand from now to the year 2100. The deeply colored area is the amount of existing reserve, which is allocated linierly to the year. While the amount of reserve will increase by the rise of the price, the increasing amount should be kept to the future after 2100. The lower arear is the demand which must be provided without natural existing reserve, The boundary between upper area and lower area is the almost of metal will have very high recycling content rate, such as 81% of iron, 94% of copper and 100% of lead, zinc, tin, antimony, indium, silver and gold at 2100. The strategic shift of material use to circulation is inevitable.

At the first place, what is Global Multi-value circulation is mentioned. The conceptual picture of Global Multi-Value Circulation is illustrated in Fig.3. Circulations are hierarchically succeeded. Upper part has higher retained value. Remanufacturing keeps the utility value of the product, and refurbish, repair follow it sequentially. Even when the value of the product is lost, value as the function is retained in the deteriorated product and recovered by refurbish at some level. Value of component can be utilized under previous level. RRRDRs are keep the retained value of manufactured goods. Below it, the value of material is used. The value of material is recovered by recycling. Recycling has different three types from the view point of what is retained. 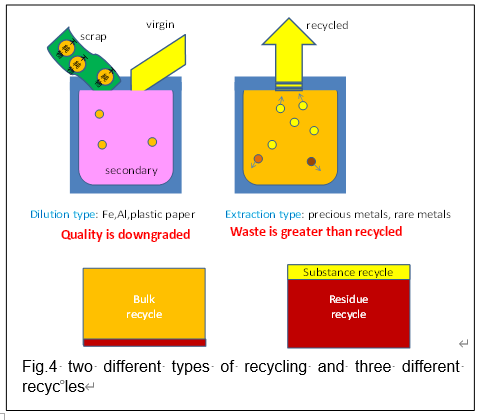 The recycle which is seated at the upper level is bulk-recycle. Bulk-recycle means the recycle in which almost of composed material is recovered. Recycling of iron, aluminum, paper, glass are classified in this bulk-recycle. Almost of retained value as material can be recovered as the same kind of material. Why “same kind”, why not “same”? The recycled material has lower grade comparing with virgin material. The reason is that the bulk-recycle is processed by the way of dilution type recycling, in which impurities and defects are diluted by virgin material so as to keep the minimum character of the material. Other type of the recycling is extraction type, in which a few percentage of valuable element is extracted from recyclate which is the object material to be recycled. In this type of recycle, minor amount of substance with higher value such as precious metals are extracted from mixed waste such as E-waste (electronic waste). It can be called as substance-recycle. Substance recycle remains greater amount of residue than the amount of the recycled substance. After recycling valuable resource, residue remains. Residue can be change into construction stuff as the lowest retained value of resources. It is another type of recycle which is can be called Residue recycle. These three types of recycle support the multi value circulation from the bottom of circulations.

With this concept, multi-value circulation forum( MVC-forum ) has launched since 21st June 2018. The member of MVC-forum is 24 companies including automobile makers, electric household makers, recyclers etc., 19 organizations including universities such as Tokyo Univ., national research institutes AIST, and NIMS and 12 observers including governmental ministories METI and MOE. 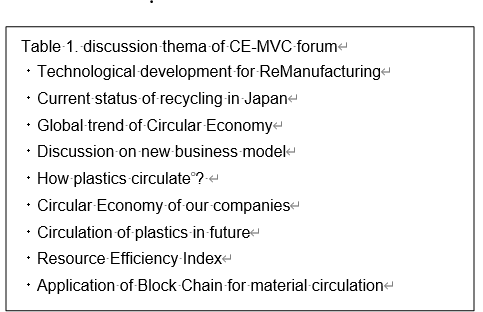 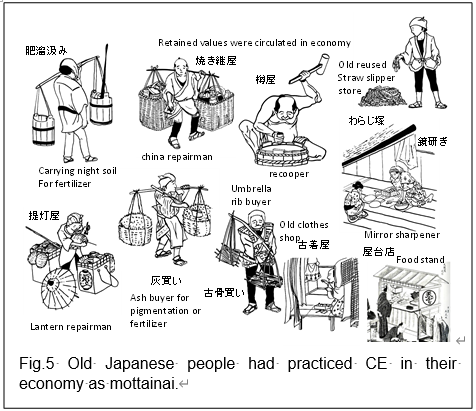 Circular Economy makes the business on circulation. Human-kind is not only the existence of producing things but that of using things which is followed by disposal. Conservative businesses are played on the stage of producing and delivery to use. Circular Economy will expand the business area to using and disposal. The prototype of these businesses are found in Japan at the years of several hundreds before. They are illustrated in Fig.5  Various type of reusing and repairing are on the business. Even china which is frangible was repaired and reused. The mind which support it was the mind of “mottainai”. “Mottai” means the essence of material and “nai” means loose. The primary meaning of mottaonai is “Don’t loose the essence of material which Gods give!” Motainai was just the mind of efficient resource use in the limited small Japan. And now, the world is getting small. Circular Economy is expected to be new type of mottainai business with higher resource efficieny in the small world. 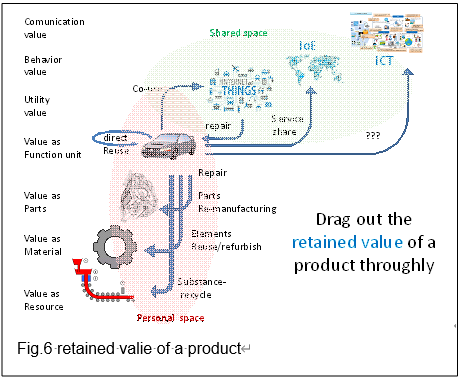 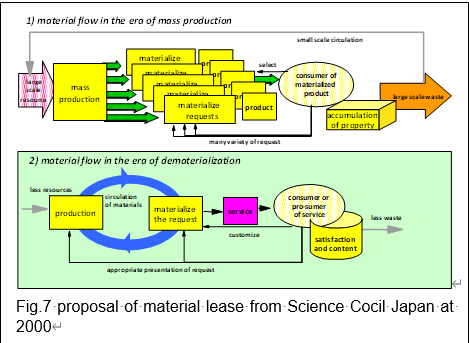 It did not so spread from a proposal from academy. Only Japanese convenient camera “Utsurundes” was a succeed of this system. The correct name of  “Utsurundes” was “Lens with film”, not “disposal camera” nor “single use camera”. However, a consumer called it “disposal camera” or “single use camera”, because the camera was returned to the film shop after shooting photos without possessing the camera. While a camera looked single use, it was circulated in the film company with remanufacturing some parts and recycling materials.

These servicizing business did not spread about a decade of years before, but now circular Economy is ready for practice as a business. The reason of the trend shift is supposed to be cutdown of the additional value with selling a goods which floods more and more in these years. New business field is now trying open to servicizing. This will be a conversion from mass production and mass consumption.

The third is platform business. A platform business facilitates the exchange among interdependent groups such as consumers, producers and dealers, and creates new additional value. A platform business can connect the retained value which was difficult to treat as business because retained value is various depending on each occasion of generation. Typical case is the reuse of the parts of automobile. In days of old, a repairman needed to collect various types of parts which fitted to each kind of automobile and very wide stockyard was necessary. Now, Information exchange connects one demand of a parts to one supply of that. 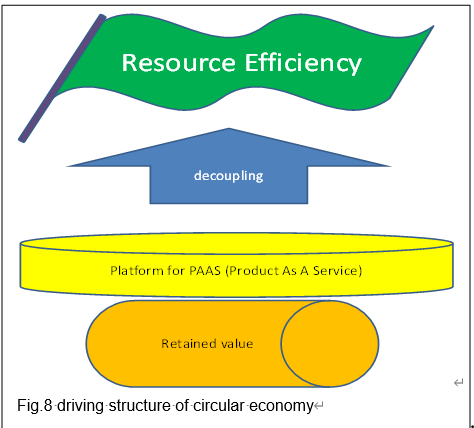 Platform business is also effective in sharing economy. Information of possession and registration connects the variability of utilization of sharable item. Reuse will be enhanced by platform business with information exchange. Mercari is a company of CtoC marketplace app. In the app, users sell and buy items which has retained value quickly from their smartphones. Mercari is a Japanese company and launched at 2013. The first company of this type was Vinted for secondhand clothes in Lithuania at 2008. Vestiaire Collectivein France at 2009, Shred Up in U.S.A. at 2009, Offer Up in U.S.A. at 2011, Poshmark in U.S.A at 2011 are following.

Circular Economy is understood to be activated by these three items, retained value, servicizing and platform business. The structure is schematically illustrated in Fig,8. The origin of the motivation is retained value, and many types of servicizing move on the platform business. They activate the economy with circulation of material and value without increasing material consumption, namely decoupling. Resource efficient society will be attained.

Resource Efficient boundary between the Eco-sphere and the Techno-sphere

Thus, circular economy has revolutional points which makes new economy. But two points should be consolidated. One is the resource efficient production and its certification. Durability is frequently insisted in circular economy, but how to acquire higher durability and quality with higher resource efficiency is not yet well considered. This should be the pre-preference issue of ecodesign. The index which combine quality, durability and resource efficiency is required to discuss the way of resource efficient production. This is strongly required on the product which is manufactured with high technology intensity. A higher technology requires various kind of critical elements which have greater environmental burden comparing their mass of use in a product. TMR(Total material requirement) is expectable to be a candidate index which can present it. Energy is also concentrated in high-technology products in controlling nano-structure of functional elements. New type of LCA which can identify and discuss the difference among products and its production method to make resource efficient production clear.

Furthermore, certification system for reliability of product from producer to users including second or third hand, such as RRRDR is required. IN the case of direct reuse and refurbish, nobody excluding producer can certificate the reliability of a reused  product. The responsibility should be enhanced to the area of RRRDR.

The other is on residue management in waste. Waste management is an important part of circular economy. While circulation is mainly considered, residue which is difficult to circulate is not so noticed. As discussed in Fig,4, substance recycle remains great amount of residue which contents various kind of hazardous material. How  residue is brought not to final disposal nor to environmental spreading but residue recycle is important, It is called zero-emission waste management that the amount of final disposal and environmental spreading to be zero. Japanese law of recycling of small size household electric equipment puts much faith in transparency through waste management root in order to accomplishment zero-emission waste management in critical metal recycling. 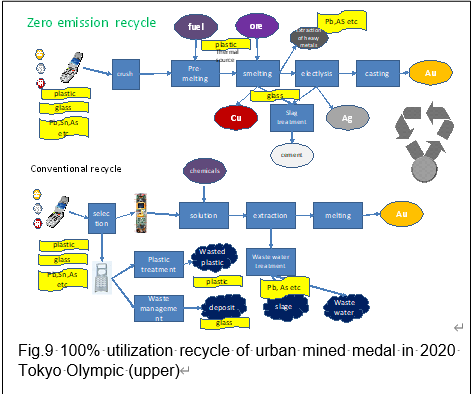 Typical example of zero-emission waste management recycle is urban mined medal of 2020 Tokyo Olympic. All of Gold, silver and bronze medals in Tokyo Olympic and Paralympic is made from 100% recycled medal. While 100% recycled medal is the first engagement in Olympic games beyond doubt, another 100% is important from the viewpoint of zero-emission recycling. The common measure of recovering gold from electric appliances uses hazardous substance such as cyanide and exhausts a considerable amount of waste, shown in the lower part of Fig.9. On the other hand, gold, silver and copper are recovered by use of smelting system which fixes the wasted impurities as slag, and slag is used as regenerated raw material of cement, shown in upper part of Fig.7. Thus, the collected smartphones and small size electric households are 100% converted into gold, silver, copper medals and cement. A certification system of recyclers with high transparency support this 100% utilization zero emission recycling. 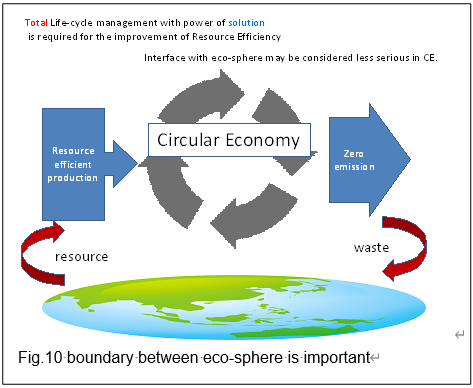 Circular Economy will open up new businesses of circulation in the economic domain, namely in techno sphere. Furthermore, stages which locate at the boundary between techno sphere and eco sphere should be regarded. The boundary stages are, as we all know, production and waste management shown in Fig.8. Resource efficient production and zero emission waste management should be more actively discussed.

As the introduction of the activity of CE-MVC forum Japan, several discussing points are introduced. Three key items of circular economy is discussed to be retained value, servix\cizing and platform economy. Circular Economy will bring us new business concerning resource circulation forward sustainable society. Resource efficient production with the appropriate index of resource efficiency and with certification of reliability for user including second and third life, and zero emission waste management should be developed more.